Hi there, I’m Zeena Moolla, author of Everything I’ve Learned About Motherhood (From My Single-Parent Dad) and in this blog post I wanted to introduce you to my amazing Dad.

‘You know, Zeena, I brought up three children by myself? And I was working full-time! I did ALL the shopping, cleaning, washing, ironing, driving, cooking – EVERYTHING! ALL. BY. MY. SELF. And, you know, for my lunch at work, EVERY DAY, I’d have a Cup a Soup and home-made cheese sandwich, sometimes banana sandwich – no “yuppie” lunch bought from a shop – just so I had enough money for all your “Maggie Thatcher” hairspray…’

I’ve heard this type of speech A LOT from my dad. It’s usually around the point where he’s in full Cup a Soup stride that I zone out or turn the telly up. This particular version of the monologue has been a favourite of his since I became a parent. It’s usually said quite defensively, when I’ve asked that he adhere to some routine with the kids I’ve been attempting, or suggest that an ice cream right before their lunch is probably not the best idea. But every word of that monologue, and its many variations, is true.

Since I was eight, the middle kid of his three children, my dad has been a single parent and an amazing one at that. He’s South African-Indian, of a Muslim background, and, as he’s told me on many occasions, he arrived in the UK in 1957 unable to do much for himself. ‘You know, Zeena, I couldn’t even make a cup of tea!’ he’ll proudly tell me as he whips up his incredible prawn curry, yet to be surpassed by any other I’ve had.

I know it’s too easy to herald single dads as heroes when far more women are raising children solo, without the same fanfare. But there’s no denying, my dad, now eighty-three (he likes to remind me of his advancing years a lot, too), does defy a lot of cultural norms.

His own upbringing, one of fifteen siblings, was much stricter than my own (although my fourteen-year-old self probably wouldn’t have agreed when I was sulkily heading home on a Friday night for a 9.30 p.m. curfew). His home life saw largely all domesticity assigned to women, while the men in his family were expected to bring home the roti.

‘Your father does all the cooking?’ one of my many aunties in South Africa would ask incredulously on every holiday there. ‘He can make chana dahl? Really? He can’t make chicken curry though? He can? Ooh, Al-laah! Your daddy is good.’

Their faces were agog in awe, and, I could see, some pity too. This life, especially for a man of his background, was unheard of. There was usually some female relative – a sister or cousin, maybe – to step in and help. Truth is though, even if we’d have had any family nearby to offer support, I’m not sure he would have accepted it. My dad has always been entirely his own person, fiercely independent and a natural nonconformist.

His childhood aversion to Madressa, the after-school Islamic classes Muslim children usually attend, exemplifies this perfectly. And the lengths he’d go to in order to avoid it still make me chuckle, even locking himself in the loo once to bunk off. According to one of my uncles, he kept saying to my grandfather, hammering on the door trying to get him out: ‘I’m making wazu, Papa!’ (Wazu being the Muslim cleansing ritual before prayer.) He was ‘making wazu’ for the duration of the Madressa class apparently and got a good bollocking when he eventually emerged.

His political views also stood out amid his family and, shaped very much by South Africa’s apartheid, he was a big supporter of the ANC (African National Congress) at the time. While many in my dad’s family found the ANC ‘too militant’ and ‘atheist’, my father was loud and proud with his views. He is a believer in equality for everyone and has rarely held back from calling out discrimination. Another uncle once told me, with huge affection, that he could personally testify to this after he’d referred to a man as a ‘Mary’, an excruciating euphemism for ‘homosexual’, and my father promptly tore a strip off him.

When he arrived in London to study law, aged twenty, after only knowing apartheid life in South Africa, he said he found the UK far more racist. While he, like every other ‘non-white’, didn’t have the right to vote in his homeland, being coldly turned away by landladies and landlords with a simple gesture to a sign – ‘No coloureds, No Irish, No dogs’ – was, in my dad’s words, deviously hostile. Immigrants were being actively encouraged to the country, only to face attitudes, abuse and signs, all without recrimination, that told them very clearly they were unwelcome.

‘At least there was no pretence in South Africa – I experienced more racism to my face in “multicultural London” than I’d ever experienced in my whole life,’ my dad huffs regularly and quite rightly.

His law studies didn’t last long, and after meeting my mother in London, he soon dropped out, took an administrative job in the civil service and got married. True to his anarchist form, he rang up his mum and dad to let them know not to expect him back any time soon.

(I like to imagine that long-distance phone call as: ‘Hello, Papa! I got married! So I’m staying in London now! OK? Hmm, what’s that? Is she Muslim? No, Catholic. Oh, and I also dropped out of law school. Why are you shouting, Papa? Can’t talk! Have to go now – I’m making wazu! Salaams, Papa! Byeee!’ My dad assures me the phone call was nothing like that, and that my grandmother and grandfather were actually very supportive, but I prefer my version.)

In 1981, by then living in a small town just outside Bristol, my mum and dad divorced, and my dad faced bringing up his three kids – a teenager, an eight-year-old and a seven-year-old – completely alone. When I look back now as a mother of an eight-year-old and six-year-old, with a husband who shares the parental and home responsibilities, I can easily choke up at how hardworking and selfless my father was. His daily life largely entailed working full-time, cooking, cleaning up, checking we’d finished our homework, and, in the days before free school dinners, making our lunches for the next day. Weekends were filled with taking us swimming, outings to the nearby pebble beach, trips to the water theme park at Weston-super-Mare and taking my brother to his ice-hockey classes – among countless other kid-orientated activities. Plus, of course, washing our clothes, ironing our school uniforms, shopping – well, you know the monologue now. The most time he took for himself was watching the Channel 4 News, usually late at night, having recorded it earlier, and, if he had any energy left, reading the newspaper.

And while I openly eye-roll at the constant reminders of the Cup a Soup and home-made cheese-sometimes-banana sandwiches he lunched on as a cash-saving means, it’s not an exaggeration. As he was still in the civil service on a mediocre salary, there wasn’t a huge amount of money – but we wanted for nothing really. Because of the sacrifices he made. He forfeited any social life, any ‘luxuries’ for himself and yes, ‘fancy-pants’ lunches, entirely to prioritise us. And I’m afraid, yes, I did use a lot of hairspray (sorry about the ozone layer, by the way).

So, I’m telling you all this about my dad, as this book, while written from my perspective, with my experiences, very much has his influence everywhere. His massive-hearted parenting shaped who I am and, undoubtedly, the kind of mother I am. And while my own sense of humour, quite dark on occasion I concede, might not so obviously be attributed to an 83-year-old South African-Indian Muslim man, I can assure you, he’s the biggest piss-taker I know. He knows how to turn any situation around with humour, and if that’s not a vital skill in parenting, I don’t know what is. 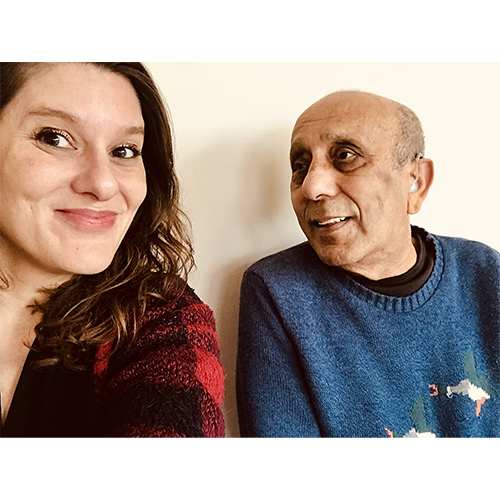